I've had a varied week. Monday and Tuesday were spent in London where I visited my dentist who drilled out my temporary filling, drilled some more and then put a gold filling in. Not a pricey one, a cheap gold, NHS one as my charming dentist told me as she drilled away more of one of my gnashers without an injection - she did offer me one, but I didn't want to forego coffee on the train back to Wales, or dribble it out of the side of one numb cheek. I did hit the roof when the dentist got on my nerves, literally. She wasn't best pleased and lectured me about pain tolerance and how she would give me an injection the next time. The tooth in question is also giving me plenty of gyp. It, like a person in Wales trying to find a dentist, doesn't fit (you need to be a private patient and there is not much private about me). It's cheaper to hop a train to London, but a right pain when the dentist doesn't get it right first time and your lower gnasher slides around on the smooth gold of the upper. A bad case of North and South.

Also in London I saw a dear friend whose husband had a terrible motorbike accident and is now in a wheelchair. Broken in body, his spirit is undaunted. I have never seen a man more transformed by his faith, so much so it has buoyed my own faith. As for my friend, she is as undaunted as ever even while she describes separating friends into wheat and chaff. Suffice to say, that when the rubber hits the road, and life hangs first in the balance, and then around hospitals indefinitely, there is more chaff, but the wheaty ones are especially nutritious. Here's to friendship through thick and thin.

Speaking of thick, in the sense of my nonsense of direction, I was on a bus going to North Acton to meet my son at a fantastic Lebanese dive of a joint that most bourgeois Londoners would avoid like the Middle East, but son and I attack with relish given it's the best Lebanese gaffs going for under a fiver - yes, if you don't mind where you sit, or whom you sit next to, you can have your mind blown by culinary brilliance and still have money in your pocket for the tube, which will cost more than your lunch, because transport in London is INSANELY OVERPRICED! Did you hear that Lord Mayor of London?

Anyway, back to the thick bit. I was having trouble with Google maps and couldn't work out whether I was travelling towards North Acton or away (I'm a Camden girl alright?). Yep, back to North and South and my inability to discern which is which except when the river Thames is there to divide it for me. The bus driver didn't know either, he might have done, only he couldn't speak English and was using a Satnav that worked. Exasperated, I broke London code (never speak to ANYONE on the bus or tube, speaking to yourself as several people including the man I was sitting next to, is fine, and will be ignored,) and turned round to the packed bus and yelled: "Does anyone know whether this bus is going towards North Acton tube or away from it?" The passengers gaped at me as if I was agog naked. Then, after what seemed like a full minute, a woman said, "Towards it!" and then the man sitting next to me told me how many stops before I needed to get off, and said: "Next one," just before I did. Then he went back to talking to himself. Smiling broke out thereafter. I love London. Here's a photo I took when I got off the bus: 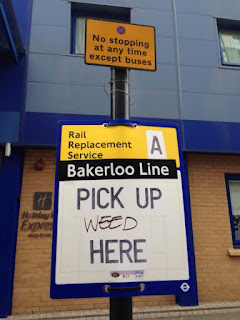