The Earth is Breathing Again

I opened my window today to blue skies and a warm breeze. The hilly landscape that I can see from my window seat is green and scattered with grazing sheep. Birds soar; there is hardly any sign of human life, but for the silent queue of people waiting for the pharmacy to open. The air that I breathed today felt fresh, and, did I imagine it? Unpolluted. It seemed that the earth was breathing again. Due to Covid-19, there are fewer planes in the sky, (When was the last time you heard one?) and fewer cars on the road. When this ghastly phase has passed, can we somehow, keep things cleaner, so we can all keep breathing better, and longer. We do so take our air for granted.

Our car, that we recently bought a new clutch for, has packed up. It refuses to move from second gear. The nation, like our car, seems to be refusing to accept that they must stay indoors to beat this ghastly virus. Here in Snowdonia, record numbers of walkers were out climbing Snowdon and otherwise ignoring advice not to go out and about, or travel to second homes. The current crisis has been compared to the Second World War - food shortages and the like - but would people have snatched up all the bog roll then, or selfishly disobeyed orders to stay at home or only go out if necessary?

In other news, I have continued my cold showers and open sea, cold water (sans wetsuit; with cozzie only) which is, as I have previously mentioned meant to reduce inflammation and increase white blood cells. It is certainly invigorating. The fam and I had a wonderful hike up our local mountain today, and we were actually hot afterward: the day was practically balmy, as opposed to barmy - the state of mind of throngs of people descending and ascending Welsh mountains in recent days. The few walkers we met kept the requires 2m distance. I continue to produce a fair amount of paintings in-studio and editing continues on my third book. As to Covid-19, it's horrid, but this too will pass.


A recent video of me swimming in an ice-cold sea in bikini and wellies (it was rocky, I was rolly).
https://youtu.be/JFI-Z7Y5sfE
Posted by Emily Barroso at 18:30

I have been determined to swim all year round in the sea this year and today I finally achieved my promise to myself. A friend introduced me to a group of swimmers who swim through the winter in cold waters. They are called the Bluetits, adorable, no? Today I bolted my coffee, got out of my warm bed and drove ten minutes to the coast where I took the plunge into a freezing cold sea. My tactic was to bolt in and keep on going until I began to swim. I made it, for a minute at least. It was invigorating, and, I think strengthening, if a little bonkers. 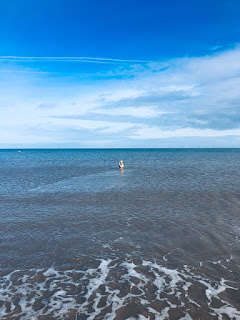 Advocates of swimming in cold water say that it increases white blood cells and fends off diseases, presumably by boosting immunity. I boosted my confidence and attracted a small amused audience at any rate. I felt pretty great afterwards. The water was a bit shocking, but I am going to continue with this jape, at least once a week.

There is a Dutch dude who is super fit, and goes by the nimble name of Wim Hof. Wim likes getting most of his kit off before delighting in swimming in freezing waters, or just hanging out in the ice for extended periods of time, or just rolling around in the like an unclad toddler making snow angels. Google him, he has to be seen to be believed. As do I, which is why I add this little video so you can stare agape at my winter sea swimming japes.

In other news, painting at the studio is going well. I have produced a number of abstract works in acrylics and oils. My three youngest children come in with me on a Friday and produce wonderful paintings and drawings. I am also working on the second book in the Big Men’s Boots trilogy. Life after cancer is good.
Posted by Emily Barroso at 14:26

I've just made and drunk the most startling green drink. I won't bore you with the ingredients, except to say, you'd want to approach it gingerly, the Incredible Hulk would be attracted to it, and it would repel vampires. My children screamed and ran away when they saw me drinking it. My middle son looked as though he was going to chuck up his dinner when he saw what is supposed to make me thinner - not really, that just rhymed. It's good health I'm after, after all that surgery and chemo cocktails, that are really mocktails as in mockingtales not sans alcohol cocktails, that are all tail and no ****. A crock basically. They really call those chemo bags chemo cocktails, on account of them being mixed just for you. Besides, the road marked Care What You Weigh is peopled with crazies and guarded by the hounds of hell.

That's not all. I also did a Grit class today. No, I did not learn how to remodel a driveway. I am on a mission to remodel myself, given I am miles away from what I looked like when I was an actual model. Truth be told, all that cancerous not being able to move much over 2019/20, plus (size) the eye-popping, hip expanding, family frightening, steroids, have left some heft. And so it was that I turned up at the desk at my local gym today, where I was asked by an amused staff member whether I'd ever done Grit before. I thought of some of the folks I've had to deal with this week and almost replied, "Yes, I do it most days," but I figured he'd take that kind of quip as a fib. The staff member continued to grin like a loon. "Are you being friendly or smiling because of what I'm in for?" I asked. "Both," he said. "Do you have any issues with blood pressure?"

Before long I was pumping iron, as my heart pumped harder than a whole house party from 1993. I wielded a weighted barbell and just, well, weight, and also swung weighted discs between my legs, as if I was going to shotput at any moment. Leaping lunges and sideways press-ups were also de rigeur. Or irregular, in my case. I also had to make like a beetle with a two-second memory - hand and foot going forward, centre, backwards manoeuvre. Most people in the class were young and fit. I just looked like I was having a fit. I emerged with a face the hue of beetroot. Everyone else looked normal. The instructor looked amused, but at least he wasn't grinning like a nutter.

I now feel crap, and seem to have a cold coming on. Thus the green gloop. I shall have to retire for bed with a stack of books and a hot toddy. Darn, I've foresworn alcohol for Lent. Can the rules be bent? It's medicine right? I'll put lots of ginger and honey and...