A 40th on Lockdown

My husband recently turned 40. Given lockdown, I gave his birthday much thought. It seemed so...significant, in more ways than that four, coupled with that zero signified. Need I remind us that we are living in deeply significant times. Life and death times. We are always living in life and death times, it's just that we kid ourselves that we are not. Encased in our sludgy-jelly soft bodies, we, (the human collective) mostly go blithely on our way as if we have any control over whether we live or die. This threat, (and for most of us it really is just a threat), looms large through our media and other dystopian cultural commentaries. Though the streets are silent(er), there is a babble out there. Some have responded by frantically making videos, others (mild hypocrisy alert) are digitally commenting all the time. Others are weighing up the meaning of life, and death; some are quietly, or loudly, freaking out. Having sorted out the meaning of life: God/Love. Simple/Not Simple, I got on to planning my husband's birthday.

Our car packed up just before lockdown and I am one of the ones who can't flip to furlogh, so cash levels are jokey. So what to do for this significant man, this significant day? The kids and I decided on a 3-day extravaganza, Mexican Fiesta - we all like Mexican, and a dash of Tequila never goes amiss. The kids agreed to do a performance and unanimously agreed that this should be La Cucaracha, perhaps inspired by life - the cockroaches that we have had to put down in the alleyway between our house and the restaurant we live in close proximity to. Armed with lyrics fearfully close to our hearts, we set to (best way to dispel our own fears is by singing and laughing at them, no?) And no sooner had my husband took off on his bike with his large backpack and bicycle to do our weekly shop some five miles away, we got to work with on the crazy.

By the time the man of the moment returned, the children had turned 2m flat cardboard packaging into a giant tortilla that my middle son wore, complete with coloured paper cheese, tomato and lettuce, and oval cut-out for his head. Scraps of cardboard were made into hats that were hastily spraypainted outside. The kids huddled in the courtyard learning lyrics and I painted Cape-Town in acrylics (my beloved's birthplace). That night I baked his birthday cake and iced and decorated it while our soon-to-be Mexicanised man was in the shower - this included slapping the buttercream that I had made all over the place and drawing 40 on the cake with an icing pen. Happily, I can knock out signage pretty accurately on the one-off, but he wouldn't have cared - it's the taste that counts. Cards were made and lovingly described. Following a tip-off from another Emily, I asked some of Simon's friends to make videos of memories. 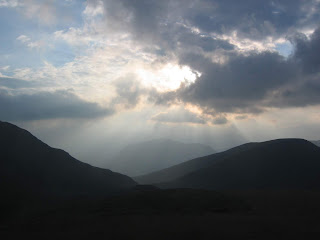 The actual fiesta was wonderful. The sun shone, we walked in stunning Conwy; the kids' performance was hysterical - they came down singing la Cucaracha as I carried in the cake, ponchos and hats on, heavy eyebrows and moustaches pencilled in, my daughter playing guitar, my little son bashing a tambourine and the middle one staggering around as a giant tortilla, as my daughter sang and my sons mumbled and bawled out la Cucaracha; the videos were heart-warming; the painting was loved and exclaimed over, and the surprising messages others sent - amongst the cards and the many moving messages sent electronically, there was a genuinely funny joke and a hilarious poem from one of our German friends; there were parcels on the doorstep that kept appearing. We ate fabulous food and drank tequila and had a noisy Marvel Movie Festival. We were well, we were together. We toasted life. He said it was the best one yet.
Posted by Emily Barroso at 13:06