The Meaning of Life

I don't usually make these kinds of things public, but during the sorrow of my mother's passing, I feel to say something about life and death; because this is what we have before us every day: life and death. These are dark times we live in, where people form themselves into political and 'other' tribes in order to attack and dismiss each others beliefs and concerns and position themselves on their own fluffy mountaintop. I have never known such hatred and intolerance on all sides.

The bible instructs those of us fortunate enough to still believe it and follow its principles to 'choose today whom you will serve: life or death.' ("See, I set before you today life and prosperity, death and destruction." Deuteronomy 30:15). Every day you can choose either 'life' or 'death' by your choices. The steps of 'death' will erode your humanity and bring its ultimate, rotten fruit. Choosing life in all its forms, has the opposite effect.

Last night, my beautiful, complicated, amazing mother, who was a gift and encouragement to so many that loved her, went to be with her creator. Many, who do not believe in God, become embittered at times like this, or speak of the meaningless of death. For those of us who follow Christ, death is no more meaningless than life itself. For Johanne, even in the midst of suffering, we take joy in the knowledge of her glorious future.

The great Christian apologist Ravi Zacharias has this to say about the meaning of life. It's been a good reminder for me today: https://www.youtube.com/watch?v=EQnkCmUOTIE 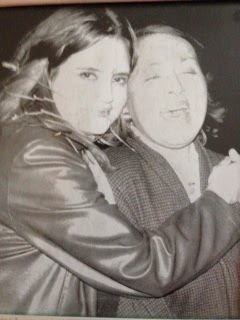 Trump has trumped his way into the top job in the USA. He really is living the American dream, whatever that is. From an outside observers perspective it's all very fascinating albeit in a car crashy kind of a way, but if cars ore crashing we must pay heed. I was concerned about both Trump and Clinton. They both seem a bit dodgy to me. Had I been American, I would have needed to vote for another option - a Twitterer I admire, alerted folks to another way of voting. The bloke from Utah seemed a decent enough chap, with experience serving his country. What I find most interesting are the tactics of all sides. There is an increasing lack of tolerance to 'the other.' Both sides are exclusive and exclusionist - on both sides of the political spectrum here and in the States. I just listened to Michelle Obama, a heroine to many, speaking. She is as crushing to those that don't share her views as the people she tries to 'heroically' crush - the language she uses, though couched in perceived goodness, comes across as laced with arsenic, as sometimes the left leaning or 'liberal' argument does. Michelle Obama singles out the groups that she wishes to uphold (her groups) as paragons of virtue; hardworking people who send their children to college by sheer grit and determination and by working all the hours. The subtext is that Trump supporters don't do that, Trump supporters are baddies and her folks are the goodies – to coin my own playground language – we, as people don’t really move on that much. Trump can't have any idea about ordinary folks because he lives in an ivory or a Trump tower. I'm not defending Trump when I say this. I am trying to illustrate a point. I think people (some Trumpters and some Brexiteers) are genuinely afraid and these fears, however unpalatable, need to be addressed.

The left leaning agenda here is similarly biased. If you voted Brexit, and according to the left leaners, for want of a better way of characterising, (liberal seems too inclusive a term, and right leaners are excluded! Dancing is out! Do the one-legged shout!) you are an immigrant-hating halfwit that should not have been allowed to vote. I have previously written about Brexit and some of the bigoted language used by left leaners and how overwhelmingly this language came from well educated, but well mean (say with London accent) people with no grasp of irony - some even demanded that these dummies (language was far worse than that; think of bad words for nether regions and what one does with those regions - don't let your mind travel too far) should not be allowed to vote. No one seemed concerned that they were thereby passively (though aggressively) articulating that the hard won enfranchisement of women and the poor should be swept up and binned as an historical experiment. It's like the aristos and the peasants all over again. French Revolution anyone? Such intolerance. It's the tribalism that is so mind-boggling.

Nowadays, if you voted to remain, you cannot be friends with a leaver. I imagine if you voted Trumpingly over the pond, you will be thumpingly excluded from any Clintonesque shindig. Naturally, people congregate with their own; but there is a problem when one's focus becomes too myopic. If we, as the vast human family exclude the members of ourselves that we don't like instead of trying to understand each other, we will become cold and lacking in empathy; the prevailing climate in Britain remains (hah!) fascistic and polarised. I struggle as I lean both ways – I often find myself (politically speaking) promiscuously dancing from left to right and right to left – I need to boogie at my own party – not there’s a thought! The inclusive party! So much more fun to be had and I have never liked wearing the same clothes as other people; which was why I went out in bin bags and sheets with alarmingly teased hair as a teenaged punk rocker. It is better to rock than to roll. Rolling has a momentum that too often ends with a crash. A certain generosity of feeling is needed to engage with members of a 'tribe' not your own. Rubbing up against the prickly thoughts and modes of being (should we dare become humble enough to do so) brings progress, understanding and peace. We need to talk. All of us. But this will require access to our own best selves.