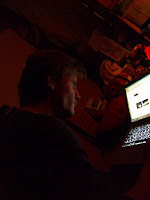 I have a startling confession to make. I wrote a whole novel - 400 odd pages with these two digits that I am now typing with. Typing is not something I have ever got to grips with. Only now, in my forties (first half!) am I learning to drive. When I first went to university, in my late twenties I wrote my essays in longhand - so long it was illegible. A merciful friend gave me a wordprocessor. Suddenly I made sense! Since then my handwriting has become even worse and I would never trouble anyone with more than a birthday or Christmas card, and truth be told, those do no always surface. I have married a man that is technical, scientific and can do maths. I joke that he loads the dishwasher like a scientist and I, like a poet - he usually does not let me near it now (see there is method in my madness!). I never did any of that techno-mathsy stuff, my excuse was always that I am good at the arts, that's what I do and that is what I should stick to - and I have, like glue. Turns out though, that as an adult, I rather enjoy science - reading about it anyway, and am pretty good at mental maths (or just being mental as my older son might quip) and want to learn more technical stuff.

When anything technical needs to be accomplished, I usually default to my computer comp-etent husband to do it, but lately, I have been realising that I have become dependent on him in this area and I ought to watch it as this kind of behaviour could result in all sorts of slides. To this end, I am now conquering my own technical challenges albeit small ones. The simple feat of redesigning (simple template stuff) this blog and learning how to upload pictures was a start, but nonetheless a satisfactory one for me. Baby steps for me, but compartmentalised thinking seems no longer good enough.

The novelist and scientist Sunetra Gupta is my role model for the day. In her own words (thank you, University of Oxford website) "she has an interest in the public understanding of science and also in the connections between science and literature at the level of language and narrative." I heard her speak along these lines on BBC Radio 4 last year. Fascinating stuff. Baby steps and giddy heights. More digits in every sense next...

http://www.sunetragupta.com
Posted by Emily Barroso at 18:04