My most successful book flog took place last November. I went along to sign books on behalf of the charity Homes in Zimbabwe. If you want to support these noble fellows you can do by clicking on this link: http://www.hiz.org.uk/Home.html
It was successful because I was giving all profits after costs to the charity. In other words, I was making nada, but I had no problem being on the make for them. I was able to don my marketing monkey suit with aplomb and become as shameless as a person in their ninth decade frolicking on a nudist beach in order to get a sale. I only had an hour to hawk my wares, so after ten minutes of smiling sweetly from a corner table and being roundly ignored, I decided to catch people unawares by infiltrating their circles as they attempted to make polite chit chat while trying to eat canapes and drink wine at the same time. "I am selling books in aid of Homes in Zimbabwe tonight," I announced popping up in their sedate circles and grinning like a loon. The group, would invariably reach into their pockets and pay up. Another charming Zimbabwean author who happened to be there grabbed an armful of books for me and came back ten minutes later without them. I was sold out within forty minutes and had to take names. 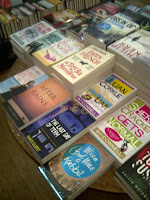 If only I could pull off this coup more often and perhaps even make a profit for those years of labour to boot! I'm thinking of becoming a charity. What with the shelves of our national bookshops crammed with Dostoyevsky on the one hand and Dragon's Den denizens on the other, with the Lucky Striker's in between - basically, blokes called Ian and the ones who write crime - which isn't to say Lucky Strike's aren't good fags - well-aged, toasted tobacco as well as good packaging, but can we have more space for the new too please?). Okay, I'm exaggerating, a little, there are a few doughty women in there, and there is some good kids stuff too. This marketing dilemma is a fact for new writers no matter how we publish (ourselves or through the mainstream) apart from the rare hype-ies who have the weight of their publishers marketing departments behind them. Surely there must be just a bit more room up there...
Posted by Emily Barroso at 19:10